JavaScript is the most commonly used language for the 8th year straight with over 60% of user base. As a result, frameworks based on JavaScript are also very popular and are the backbone of many front end and back end web applications.

jQuery is a lightweight JavaScript library with the purpose of making it much easier to query elements and chain actions in a web page. Instead of writing many lines of JavaScript to accomplish a task, jQuery make it easier by wrapping them into methods that you can call with a single line of code.

Angular is one of the most stable and efficient JavaScript frameworks. It is run by Google and can develop single page applications. It can also be implemented into HTML and runs like a cross platform, so it makes no difference what system you use it for.

Vue.js came out in 2016 and brings in a wide variety of features. It relies on virtual DOM, meaning viewers can also see the final changes that reflect in the real DOM. Other than that, you got CSS animations and transitions, lots of HTML based templates and a short learning curve.

Meteor has plenty of uses and can cover more areas, such as business logic, database management or even back end development. It is suitable for all kinds of web applications due to its numerous features – lots of templates, automatic CSS and access to its own cloud platform.

Node.js is well scalable and will grow along with your applications. It is open source and works on multiple platforms. It features asynchronous I/O and features a super fast code execution due to running on Google Chrome’s engine. Uploading video and audio files is extremely fast – no buffering there.

Aurelia is a new version of JavaScript. It is more stable and reliable and allows building more efficient websites. You can extend its framework to HTML as well. In terms of operation, it is very clean and brings just the right features – no random bells and whistles or abstractions.

React is developed by Facebook and allows developers to bring in dynamic user interfaces to websites with plenty of traffic – everything in a fast and simplistic way. It comes with numerous features, such as the capability to create dynamic UI for apps, virtual DOM objects, W3C object model events and JSX.

Despite being relatively new, Ember.js has gained notoriety overnight due to its two way data binding and the possibility to come up with sophisticated user interfaces. It provides CSS and HTML access, as well as instance initializers and numerous templates. Websites like Netflix and Linked in rely on it too.

Mithril is quite basic, but also intuitive and easy to get along with. It is small and super fast – no fancy script. It is mostly used for single page applications. Other than that, its features include full stack solutions, but you also gain access to XHR functions and routing.

Polymer is made by Google and available as an open source framework. You can come up with a series of different elements without requiring any experience – no small details or complex codes involved. It is suitable for both one and two way data binding, so it provides a bit of versatility.

Backbone.js is quite popular, mostly because it is straightforward and easy to get used to. It is recommended for single page applications. It relies on JavaScript features and introduces users to simple libraries and more than 100 extensions – also, it comes as an open source framework.​ 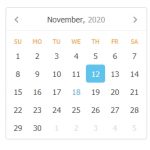 Check if a JavaScript object has a property

How to refresh page with JavaScript

How to Remove Whitespace Characters from a String in JavaScript