A radar chart is popular in various names including spider chart, star chart, cobweb charts, star plot, web chart, polar chart, Kiviat diagrams as well as an irregular polygon. It is equal to a similar coordinate’s plot that has axes placed radially.

Each variable is given with an axis that begins from the middle. The entire axis is sorted out radially, with the same distances between each other while keeping a similar scale between the entire axes. A grid line which links from one axis to other serves as a guide. The value of each variable is plotted together with its individual axis. The whole variables in the dataset are linked together in order to make a polygon.

The main advantage of a radar chart is that it allows for more data to be shown than with a line graph. This means you can show your audience how one value changes in relation to many others at the same time, without having to selectively pick which ones are important enough to include on the graph. It’s perfect when you’re trying to compare the relationship between two or more sets of values over an extended period of time, and gives viewers plenty of information about how those numbers changed against each other so they could make their own conclusions as well.

Despite the many perks it provides, there are some flaws in using this kind of chart, such as: 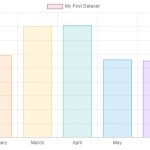 Different Types of Charts for Visualization

What is a Diagram Frame?

What is a Gauge Chart?