Hacking is the process of gaining unauthorized access to a computer system or network. Hackers use a variety of methods to achieve this goal, including exploiting security vulnerabilities, using social engineering techniques, and breaking into systems using brute-force methods.

Hacking can be used for a variety of purposes, including obtaining sensitive information, stealing money, or vandalizing systems. Hackers can also use their skills for more benign purposes, such as identifying security vulnerabilities so that they can be fixed or investigating cybercrime.

Despite their negative reputation, hackers can also be used for good. For example, white hat hackers are often employed by companies to test the security of their systems and identify vulnerabilities before they can be exploited by criminals.

Hacking is a mystery to many people. They don’t know how hackers do what they do or why they do it. Let’s explore some interesting facts about hacking that will help you understand this fascinating world a little better.

The first recorded instance of hacking occurred in the 1960s reported by MIT’s student newspaper. A group of students used a computer to gain unauthorized access to a telephone network and make long-distance calls for free.

The term “hacking” has a long history, dating back to the early days of computing. Originally, it referred to the process of finding creative ways to solve problems or overcome limitations. This could involve finding new ways to use existing hardware or software, or developing new tools and techniques. Over time, the term came to be associated with computer programming, and it was often used to describe the work of skilled programmers who were able to find clever solutions to difficult problems.

According to the FBI, cybercrimes have increased by 300% since the outbreak of COVID-19. This surge in crime is not surprising, given the fact that many people are now working from home and spending more time online. Unfortunately, criminals are also taking advantage of the situation by targeting people who are isolated and lonely.

Bob Thomas was a computer scientist who is best known for creating the first malware program, known as Creeper. Creeper was created in 1971 as an experiment. The program was designed to replicate itself and spread across computer networks. However, it did not cause any damage to the computers it infected. Despite this, Creeper was considered a threat at the time, as it demonstrated that malicious code could be spread electronically.

According to FBI Director, the bureau is having difficulties filling cyber-crime-fighting roles. The reason? Marijuana is also popular among many of the United States’ top computer programmers and hacking experts. The use of marijuana is still illegal under federal law, which means that anyone who uses it is ineligible for a job with the FBI.

In 1978, a program called ANIMAL was released. The program would copy and move ahead, passing itself along to other computers on multi-user networks while the user engaged in a guessing game. ANIMAL did not destroy a system, but it was the first “Trojan” of its kind.

Nicholas Webber, a convicted hacker serving a five-year sentence, was invited to participate in an IT class at the prison where he is incarcerated. It is unclear how he came to be invited into the class, but what is clear is that he used the opportunity to successfully hack into the prison’s mainframe.

In the movie Matrix, the character Neo is shown using a variety of hacking tools to gain access to various computer systems. While some of these tools are fictional, many of them are real-world hacking tools that are used by hackers today.

Lenovo is a Chinese computer company that is partially owned by the Chinese government. As a result, their computers come preloaded with secret backdoor access that can be used by the Chinese government to spy on users. Because of their potential for spying, the Lenovo laptops have been banned by MI6, the CIA, and other spy organizations. Lenovo has denied these claims.

In 2014, two gamblers were brought up on federal hacking charges after they found a king-size bug in video poker and took advantage of it to win half a million dollars. The case was dismissed. The incident highlights the importance of understanding the difference between hacking and simply taking advantage of a loophole. This ruling highlights the importance of understanding the law when it comes to hacking. While it is legal to exploit vulnerabilities in systems, it is important to make sure that you are not breaking any laws in the process. Otherwise, you could end up facing serious consequences.

After Timothy Lloyd was fired from his job at OMEGA in 1996, he decided to take revenge on his former employer. He planted a so-called “time bomb” within the company’s computers that would delete the OS two weeks after his lay-off. As a result, when the time bomb went off, OMEGA lost over $10 million and had to fire 80 employees. While Lloyd’s actions caused significant damage to the company, it is also worth noting that he didn’t profit from his scheme; in fact, he ended up serving time in prison for his crimes. Nevertheless, this case highlights the importance of security measures to protect against malicious insiders.

At 16 years old, Sean Parker was already a seasoned hacker. He had successfully hacked into many high-profile companies. One day, while in the middle of a hacking session to the Fortune 500 company, his father unplugged and confiscated his keyboard. Sean was unable to log out, which meant that his IP address was visible to the monitor. He was quickly identified and arrested by FBI agents. Sean served time in juvenile detention before being released on probation. He went on to co-found the popular social media site Napster.

In the 1980s, a new type of crime began to emerge: computer hacking. As the use of computers became more widespread, so too did the number of people who tried unauthorized access to these machines. Because no specific criminal offense existed at the time, the first person to be charged with hacking a computer was not incarcerated.

In 2015, one of the largest bank heists in history took place. Over 100 banks were robbed of approximately $1 billion by cyber hackers. The hackers used a variety of methods to gain access to the banks’ systems, including phishing scams and malware. They then transferred the money to their accounts or accounts controlled by shell companies. 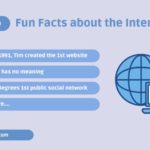 50+ Fun Facts about the Internet