A batch file is a type of script that can be used to automate tasks in the operating system. It contains a list of commands, stored as text, and saved with a .bat extension. These scripts are often used for unattended installations or other large-scale operations where it is not practical to have human interaction.

Batch files are usually used to automate tasks. There’s a lot of ways you can use batch files for useful things: make shortcuts, download and install programs without the need to follow prompts on your screen or input commands manually, open folders that would otherwise require typing long paths in Windows Explorer.

How to create a batch file

A batch is easily to be created.

Example below is used to restart Odoo 12 server on Windows after deleting its log file:

How to run a batch file

In order to run a command line, you need only type the name of it in a Terminal program. For example: DIR and then Enter will display all files in the current directory. Likewise, typing EXIT will close that program (and any other programs running inside).

Batch files are executed by the COMMAND.COM program, which is part of DOS and Windows. To run a batch file, you need to Open or Run it. Right-click on a batch file then choose Open or Run as Administrator to execute the batch file.

Batch files can contain executable software commands which means it is a good idea to be careful when downloading and opening any unknown batch file.

The Mac and Unix have other tools. AppleScript and Unix commands can be used for similar tasks.

What is DLL File? 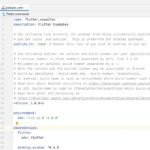 What is YAML File?

What is AIFF and AIFF-C File?