This post will introduce you useful ways to check what version of Python is running.

Python developers often find themselves in a situation where they are unaware of the most recent security updates and vulnerabilities. This is because many organizations choose to use Python as their development language, but have not yet updated it since its release date or do not know how to update software.

You need to know your current Python version to see if it has security holes and to download correct external library for running version.

And upgrading has many benefits:

Check version on the command line

Commands below can be used if both Python 2 and 3 are installed on your system and the default running one is Python 2. python --version prints out the current running version.

sys and platform module 2 default libraries which can be used to get the version of Python that is actually running.

They are used in the situation where you don’t know which Python are powering your app. So you need to add a version check in the app’s script to make sure. 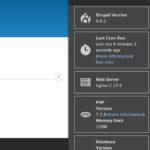 How to Check Drupal Version