Disgaea 5: Alliance of Vengeance is a strategy-based RPG from the developers over at Nippon Ichi Software, the same team behind all of the previous entries. Originally released on PC and PS4 – and later ported to the Nintendo Switch – the game was originally released on the 25th March 2015. The game has you making numerous different characters, levelling them up and improving them as you play through the game’s story mode, allowing for them to be leveled all the way to level 9,999. 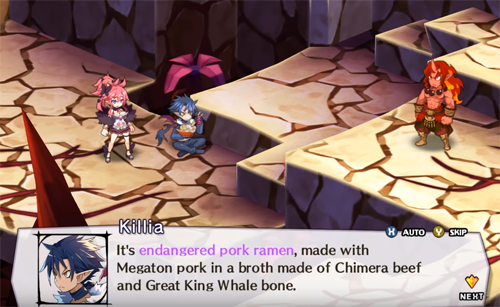 The game’s story focuses on an individual named Killia, a demon with a plan to defeat the Void Dark, a task that isn’t quite as easy as he hopes. In the search of allies to help quell the oncoming Void Dark, Killia sets out to find some of the strongest Overords and allies I the Netherworld to complete his conquest. The story is pretty simple and isn’t particular outstanding, but with the varied and enjoyable cast of characters it’s never really a dull moment between the entire party.

The game has 2 main gameplay phases: the SRPG combat and character creation/improvement. Starting off with the character creation and improvement, throughout the game you end up creating a lot of different characters, all throughout a selection of vast and varied classes. At the start of the game, you don’t have many classes to create, but as time goes on, you’ll unlock new classes and upgraded versions of the classes that you already do have, giving you more than enough to progress towards in this game. On top of that, there’s even a mechanic where you can effectively “reset” your character to level 1, but depending on how high they got in terms of levels, their stats will be a lot higher in comparison to a brand-new level 1 character. There’s a lot of strategy with your own characters and is pretty much half of the game if you’re not too careful. 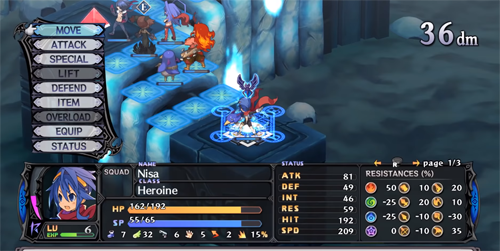 Focusing on the next major part of the game is the combat, which is a grid-based system that takes height and distance into consideration. Between you and the enemy AI, you’ll take it in turns to move your characters around the board, make your attacks or use items, that sort of thing. You can deploy a number of different characters onto the board, and with each character, they can all move once and make an action, such as attack, use a skill, or an item. Having two characters next to one another during an attack can cause a team-attack to take place, which usually does more damage. After taking these actions, the character in question will usually gain experience for their actions.

The further you get into the game the levels slowly become more and more difficult, both in layout and enemy strength, meaning that if you don’t grind up some of your characters to a reasonable level, they’re going to get destroyed. For someone that doesn’t like grinding, this game is going to be horrendous for you, as it’s one of the biggest attractions for the game and the series, partly due to the fact that you can get all the way up to level 9,999.

Aesthetically speaking on both the PS4 and PC – of which there’s no real visual difference between them – the game has a very clear anime-inspiration behind its cutscenes, character creations, and overall spell and ability effects. Disgaea 5 has a lot of colour and visual flair to it that make it a treat to play for people that like that visual style; unfortunately, if you’re not someone that enjoys the anime art style, it might be hard to look past.

Overall, Disgaea 5 on PC and PS4 is a sequel to one of the best SRPG series out there, due to its vast replay-value, striking visual style, and gameplay that will keep you roped in for hundreds of hours if you let it. Again, if you don’t like grind in your games, Disgaea 5 is the wrong game for you, as it is designed for you to spend hours working on your favourite roster of characters until they’re at a standard you’re happy with. For anyone that’s looking for that grind, however, it’s hard to find a game that can beat the Disgaea franchise.